I heard from a little bird that your Crane quilt is going to be in a book...what's the scoop? md
Posted by Mary Drew at 8:29 PM No comments:

Well, second nephew is now a married man. I'll just blog one photo - I hope to get the rest into a private web picture site soon, so the rest of the family can vicariously visit the NW. 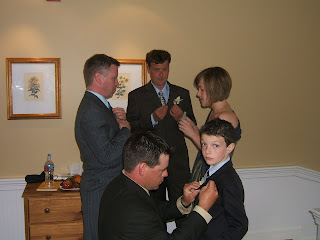 The question of the day: How do you spell boutinniere? boutineirre? BOO - tin- ear?
Posted by Mary Drew at 6:49 PM No comments:

Email ThisBlogThis!Share to TwitterShare to FacebookShare to Pinterest
Labels: family

Hey there Mare,
I will see your blog and raise you....here is the link. Look for the Looney tunes reference, it is at the bottom of the page.
Do you think we should warn Christy?
Love,
Nancy
Posted by Nancy at 8:47 PM 2 comments:


Nancy, read this post for a good chuckle. Besides, he's absolutely right!

Howdy Nancy.
Whew. Back home again for barely three days and then I'll be on the road to Seattle for the nephew's wedding. But first, the Missoula trip: one of the first places we stopped was Ninny Pippi. Oh, that's just how the Minnesotans pronounce it. They've got all those words with Minni in them, so their tongues naturally do that. 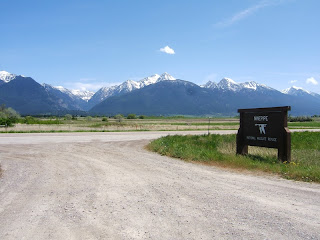 OK, ok, it's just Ninepipe. We only stopped so we could tease you about mispronouncing it all those years ago. As you can see, it was a pretty nice day. That was Friday.

On Saturday came the actual graduation, with ex-spouses and current spouses all in attendence and on very good behavior. I took over 50 pictures that I eventually hope to have up on one of my web albums, but until then, here's my favorite: Christy with her uncle and cousins. Who could disagree with the old adage, great minds think alike? 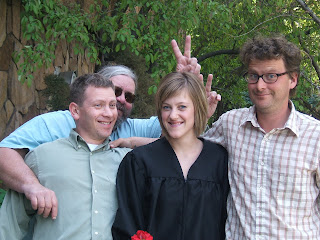 Besides that, on the weekend came some INSANE card games, complete with a cat (Hendrix) 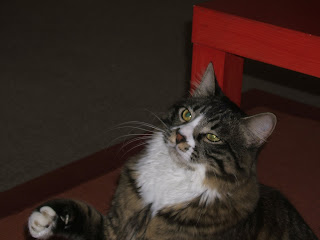 and vintage cat glasses, worn by Amanda who, 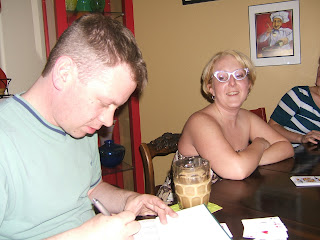 besides having great taste in eyeware, proved to be a great cook and a gracious hostess.
Sunday was given over to shopping with a Mother's day meal planned by Amanda and executed by her and Ben.
Monday, the Grad began the arduous process of moving out of the dorm. I brought some of her stuff back to Whitefish with me. Jeni stayed in Missoula with Number One Son. 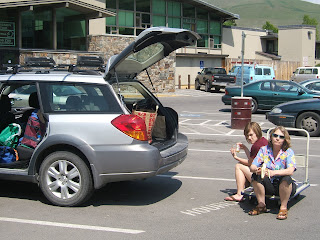 The highlight of the day was finding Jeni's Mother of the Groom outfit at the Secret Seconds store - a thrift run to benefit the YWCA, which also runs the domestic violence agency for Missoula. They also have a cool program called GUTS! (Girls Using Their Strengths) to mentor girls of all ages.
Which brings us to today - Tuesday. I worked all day. I have tomorrow off, then I must be at work at 10:30 Thursday, leaving immediately for the airport to get to Seattle that night, dropping by Missoula to pick up Christy on the way. So I have to be all ready to go in less than 48 hours, and 16 of those hours I have to sleep. And some I have to work. And some I have to eat and mow the lawn, and pay bills and figure out how much money I really have for this trip (answer: none...oh well, I never let it stop me.) Glad I don't have to buy film for the camera or pay to get it developed. We'll keep you posted. Love, Mary
Posted by Mary Drew at 9:28 PM 2 comments:

I should be packing...

...but I almost always end up doing this last minute thing. I had to get those plants that I bought at last Saturday's Farmers' Market in the ground after work tonight, and of course, someone would call to look at the house at the last moment, so I had Jeni slaving away cleaning. HAR! She is really good at cleaning; she's cleaned my house for me many times during moves. I really owe her. Y'wanna buy a house? It's really clean: 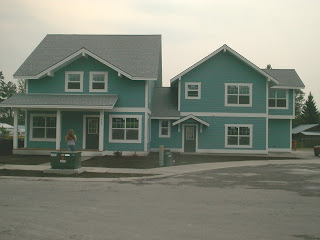 Actually - this is an old picture, before we moved in. We have a lawn now. To see a (hilarious) movie that the realtor made, go to this link and click on featured tour. Gee, I can almost smell the coffee at Morning on the Cul-de-Sac.
Jeni & I will take pictures of graduation and whatever else we want in Missoula. We love you, Mary
Posted by Mary Drew at 11:15 PM No comments:

So this is Fernie

Hi Nancy,
We seem to be having a lot of sky in the blog lately, and here is some more - sky on top of the mountains of Fernie, BC. And this was only a little bit of the mountains. 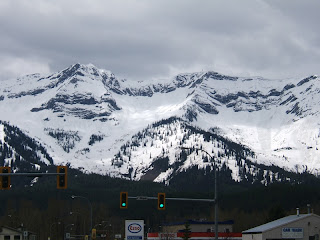 I drove to Fernie today to pick up this sister: 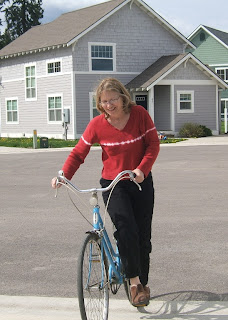 shown here demonstrating her skill at dismounting a bike. Apparently, in Fort Nelson her bike is famous. She comes out of work to find it decorated by staff (once with a fake parking ticket), and even has the janitor applying WD-40 when he thinks it needs a little TLC.
Besides that, we talked about the sad fact that the new presidential dollars will eventually include one with our present president on it, the benefits of apple cider vinegar, what people should do with the money we give them as presents (whatever they want as opposed to what we want - damn!), why you pick dandelions for wine when the flower is closed instead of open, what Dad said, which card is best for Zeke Zychal's birthday (and if my scanner was working, I'd show it to you), why can't we remember anything anymore, and who knows what else. This is only the beginning.
We've already visited the second hand store once, and plan to go tomorrow again just so we'll have more time to look around. Goody. After we came home we had some fresh roasted coffee: 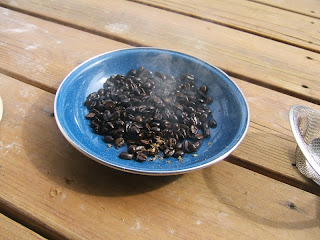 Columbian - a dark Vienna / French roast is my guess. Tomorrow I work most of the day, so Jeni will have to amuse herself. I'm sure she'll have no problem, except for maybe remembering people's names. And we really, really wish you were here too.
Love, Mary
Posted by Mary Drew at 11:13 PM No comments: 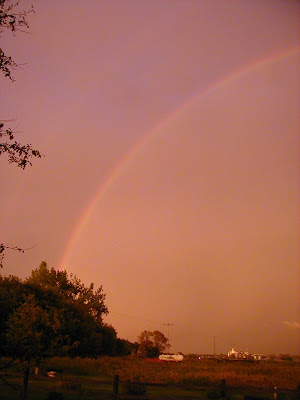 Them grain thingy's are grain bins. They are usually found on farmsteads and at grain elevators. I suspect those are grain elevator bins you are seeing there cause they are really big. The ones on farms are usually smaller than the ones at elevators.
Way in the distance (a mile away from the camera and past the fertilizer tank) are Clifford's grain bins. Hmmm they look awful small compared to the majesty of nature don't they?
We do have a farmer's market up in Mayville. It is one guy and his camper topped pickup. He is helped by his wife and occasionally his granddaughter. I hope they will be around again this year because he has cancer and gardening is his life.
He doesn't do any needlework, nor does his wife.
However they are right next door to Faye's so I see them every Tuesday during the season.

Dear Ms. Drew - do you go to a Farmer's Market where you live? I caught the Kalispell Saturday Market before going to work today. What are those grain thingies in the background called? 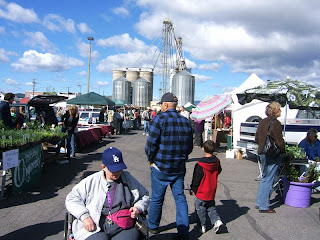 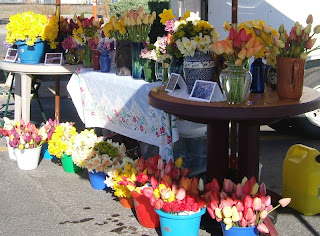 ...and this lovely woman who made all these crochet doilies.... Actually, doily isn't the right word. Maybe works of art would cover it. She gave me her name and now I can't find the piece of paper, but I will.

She showed me thread she gets from Hungary and France. She was most excited about the old tea colored ones she's getting from France. 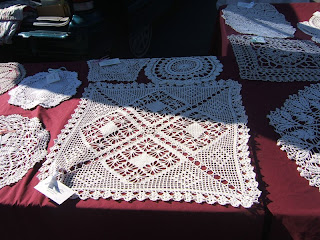 I just thought she was so great. Maybe someday I can afford one of her works of art - I am going to frame it and hang it on a wall, not put it on the back of a sofa.

Tomorrow is Sunday. I will spend it with the Cupcake girls: 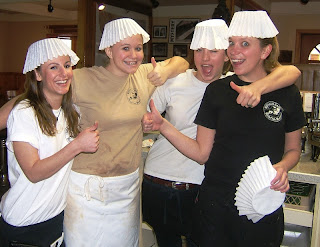 They are never any fun. Love ya, Mary

Howdy from Big Sky Country. Here's what the sky looked like two days ago (before these mare's tails ushered in the rain.) 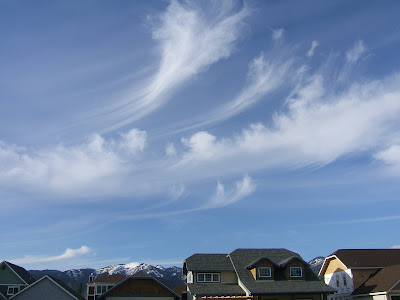 Since then it has rained and snowed. There's more snow up in those mountains now, but it's not sticking down here in the valley, thank god! l, md
Posted by Mary Drew at 11:02 PM No comments: