What you've been reading lately....

I see you've read Barbara Kingsolver's new book, Animal, Vegetable, Miracle. What did you think of it? Due to school, I've kept my reading light. I'm on the sixth or seventh of Robert B. Parker's Spenser series (hilarious because Spenser is still a few decades back at this point) and I'm on the second Amelia Peabody. I'm feeling pretty good because I finished exercise 7 in my 545 class; only one more to go, and the final paper - about something I don't understand har! What's collitch if you don't learn to fake your papers? 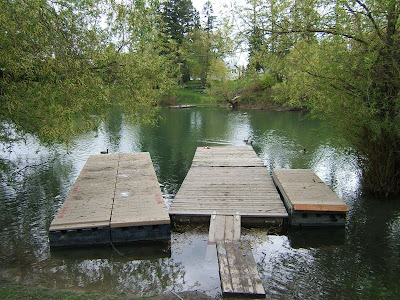 For a little visual interest, I include a picture of the docks in Whitefish River at Baker Street Park. Even though it's really Baker Avenue, it's named Baker Street Park. The water was a little high that day. This is a good taking-off point for an easy kayak or canoe paddle up to Whitefish Lake and back.

Well, to bed and Peabody. Hope I can cram some more end-of-quarter studies in tomorrow, before and after work. Love you, Mary
Posted by Mary Drew at 12:25 AM 2 comments:

What is HOT at Faye's Quilt Shop 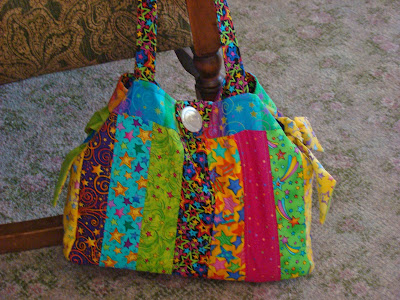 This is what I have been doing lately. The star one is MINE and the floral one will be Jeni's I have two more cut out and ready to sew. Should be fun. I also have this wonderful black fabric with bright colored cats flying across it. I think I could use that for one too. It is a Laurel Burch fabric. 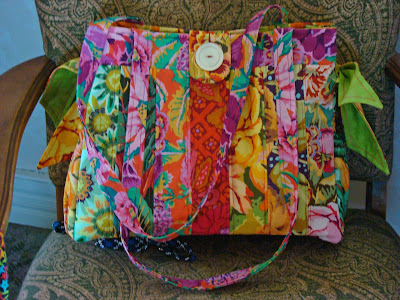 When I came back from Minneapolis my friend DeAnn was making these like crazy. She has made about 15 of them I guess. All the rest of the quilt ladies up at Faye's are making them too. Of course I HAD to make one for myself.
The design is by Tara Lynn Darr and is called the Ashley purse. Let me tell you it is the most heavily detailed and hard to understand pattern I have used in a long time. My brain must not work the same way hers does. However I rewrote the cutting instructions and that helped alot. Now I am in the process of fixing the general instructions so they work with my brain.
However once you get it figured out it is a lovely design. I get tons of compliments on it.
Love,
Nancy
Posted by Nancy at 9:51 AM 3 comments:

A windy day in the garden

The servant has been very lazy and not posted for ages so I had to steal her new laptop and put up a post. Yesterday she was out gazing at the birds for a long time, so I had her take a video.

The wind was gusting to 40 - 45 mph and kept buffeting her around so she stood against the door and tucked the camera up to her chest. With her heft you would think she could have stood still. She managed for much longer than I figured she would and you can see, and hear how windy it was.

At least you will be able to if I can get this video up on the website. How hard can it be? There is the little movie icon just like on her camera. She wants this to remember all her birds when she is in Minneapolis without them. What a sap.

You will probably be bored before it finishes but I expect FattyKitty will like it.

Speaking of whom, I hear the fattykitty is having a little trouble getting onto his computer. Evidently school makes librarians much more possessive of their laptops. You will have to just stop taking so many naps dear FK. Then you might find some 'desk time'.

Ha ha! I know where that snowstorm came from:

So two days later it was snowing in eastern North Dakota. We ought to keep track of the weather and see if this is a regular thing. Sorry to tell you that it's rainy and cold here today...Love, Mary
Posted by Mary Drew at 9:48 PM 3 comments:

Happy Birthday to YOU

Dear Mary,
Still getting snow over here. This is from yesterday morning. 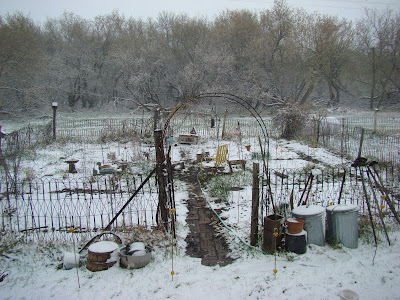 I also took a few more bird pictures. In the front, a pair of white crowned sparrows and in the back a white throated sparrow. 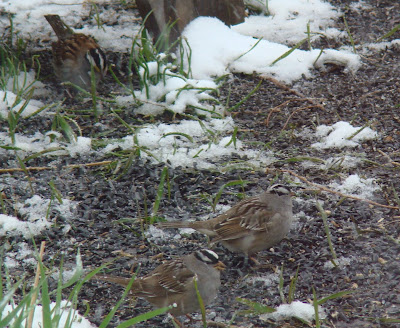 Hope your birthday is a good one.
Love,
Nancy
Posted by Nancy at 10:13 AM 2 comments: 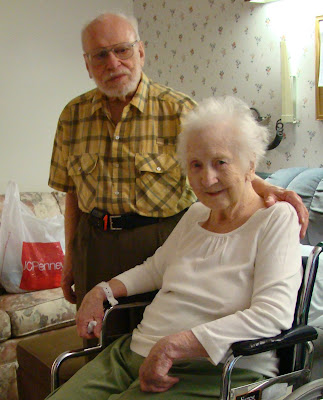 Hi there Mary,
I took some pictures whilst in Minneapolis and here they are. First, from Tuesday the 6th a picture of Mom and Dad. Then today we all went to visit Mom so she could meet Liz and Dresdon. 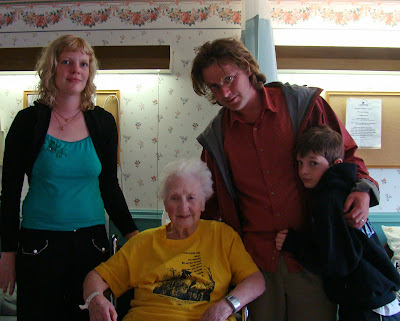 Then of course, we had to add 'Grandma Jeni' into the pic. 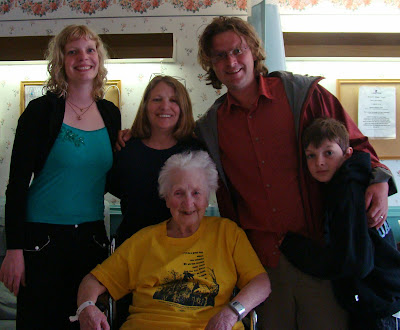 And then we had to add Great Grandpa Bruce, the Champion of Hand and Foot, to the picture. 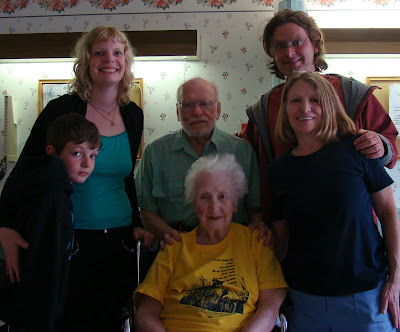 And then we just got silly.... 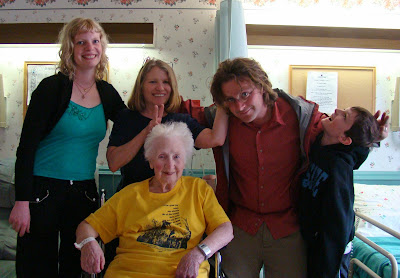 I think they are going to have some lively card games this weekend. 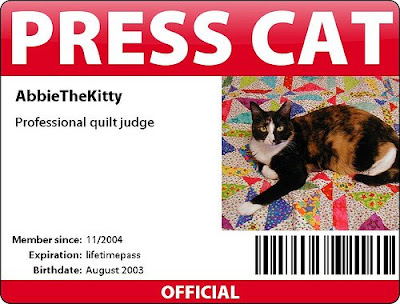 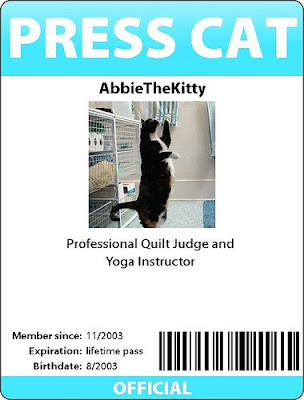 Hmmmm now I can use my press pass when I go to quilt conventions or yoga seminars.

How about you Fatty Kitty????? 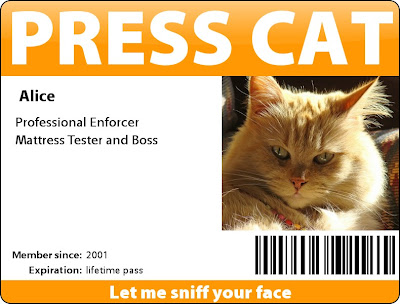 Dear Mary,
Happy May Day. When I was younger May Day was when you went around to the neighbors and hung a basket of flowers on their doorknob, rang the doorbell and ran and hid and watched them get flowers.
Even when I was young that was becoming rare. I doubt anyone does it anymore. 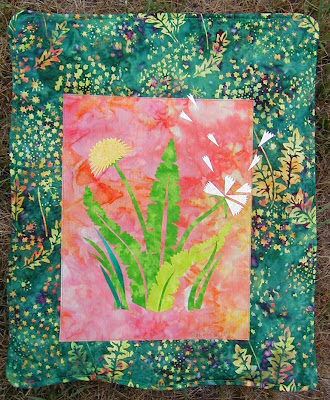 However here are some flowers for your doorknob. 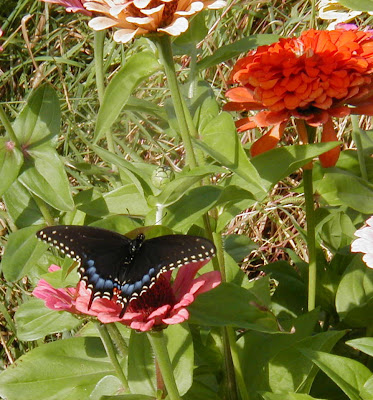 Eastern Swallowtail. I get one or two a year and always run out to photograph it. 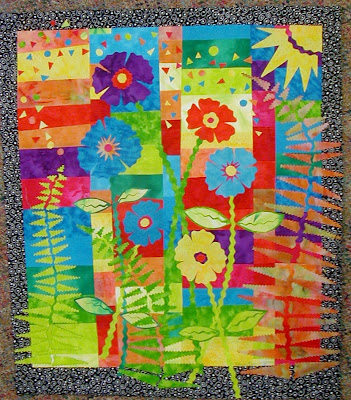 This one was pure luck. I was waiting in the garden for a sphinx moth to come and land on my flower. I was being very still, and the hummer came instead. I actually had the presence of mind to take the photo. 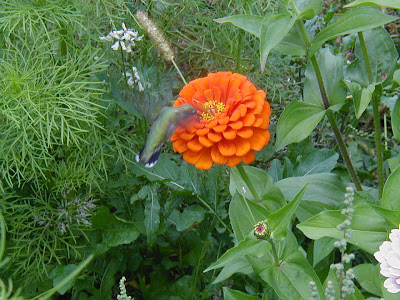 Here is the moth I was waiting for. Cute eh? 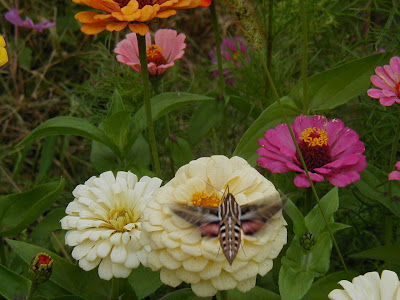