The day after the blizzard

Hi there Jeni and Mary,   These pictures have been ready to post for about a week.  I guess I have been lazy.

Some say the world will end in fire, Some say in ice.

Howdy -
I'll leave it to you to read the rest of Robert Frost's poem.  I'd like to talk some more about ice - in fact, water in all its forms.  For instance, nice blizzard you're having in Minnesota.  I just saw on the news that the Metrodome has been flattened.
And then there's the little dusting of snow Billings got this morning, just enough to hide where the really slick ice is.   Here's an example of a Billings side street:


Underneath the dusting is a crusty, slippery obstacle course. We've had some warmer weather, but it will take one massive chinook to take care of what we've pressed into ice by driving on it.
And then there's the ice that formed in a basement pipe in Whitefish, and thawing, floated up under our kitchen sink and got stuck in the water filter, bursting it. 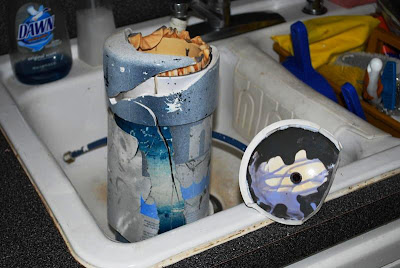 Of course, we knew nothing of this.  After being gone for two weeks, Brian arrived in Whitefish around 9 pm. He was tired from an 8-hour drive extended to 11 hours by bad weather, running out of gas, and a nasty case of the stomach flu.  He was ready to just empty the car and fall into bed.  Instead he was greeted at the back door by two inches of water in the kitchen, and it was still running out of the burst filter: 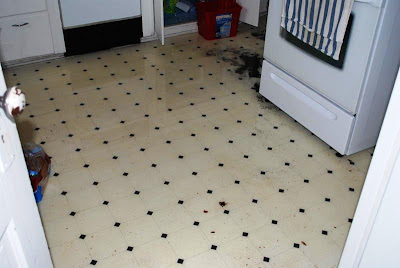 It looked like the water had been running for some time.  Here's what our 80-yr.-old oak floor looks like now:

Brian says the linoleum in the kitchen is toast too.  When he went down to the basement to turn off the water (because there was no shutoff under the kitchen sink), he said it was "raining" down there.  Of course, that's where all his tools are. 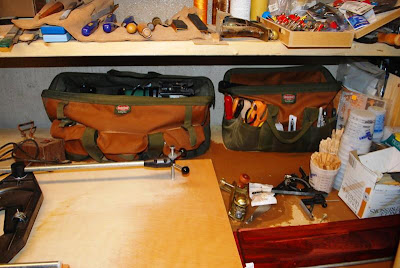 "Luckily" the water did not get too high upstairs because it was running into this furnace intake vent and thus down into the basement: 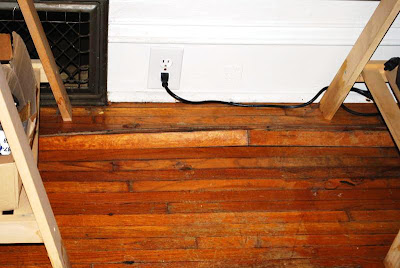 The furnace is still working though we'll have to get it checked on.  To top it off, the weather has been bad enough to keep the insurance adjuster from making his visit.  He lives in Great Falls and that's about 3 hours away over Marias Pass.  So we'll have to wait a few days more to see what he says.

Regarding Frost's poem about which would be worse, I definitely prefer this to a fire.
Posted by Mary Drew at 2:26 PM 4 comments:

Hi there Mary.
We are having a nice day here.  I have beaten our sister Jeni at Hand and Foot one more time.
And then, it is snowing.  Well really it is blizzarding, if that is a word.
And then, Alice is depressed...
She has problems...
The mouse she released on her release site, our bed, has escaped...
We will look forward to that Alice.   NOT.   How about if you show it to Jeni tomorrow?
Love, Nancy
Posted by Nancy at 2:08 PM 1 comment:

Hi Mary and Jeni,
I took some pictures on the way home last week and here are a few of them
That's all for now.  How is the snow in your street doing?  Still there?  Frozen?  Melted?
Love,
Nancy
Posted by Nancy at 11:15 PM 2 comments: